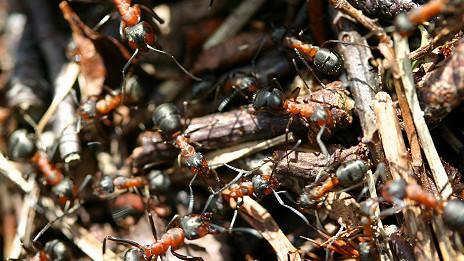 With ants, it's all about teamwork

Researchers studying how microgravity affected their behaviour found the ants demonstrated an impressive ability to walk on surfaces aboard the space station. Crucially, the ants still worked as a team to map out their environment. But Professor Deborah Gordon, who led the research, said they reacted very differently from the astronauts in zero gravity.

(They) kind of skittered off to one side and tumbled around. And it was always really interesting to see how they got their hold back. Sometimes they would grab on to another ant and climb back down on the ant back on to the surface, and sometimes they somehow managed to flatten themselves back on to the surface. And so I think the biomechanics of that are interesting.

The results from this research could have applications here on Earth. It's hoped that information gathered from the ants' search patterns could help researchers create robots which could perform tasks like searching disaster zones or burning buildings for survivors.