Tributes 追悼辞 have been pouring in for the Wales football manager, Gary Speed, who was found dead at his home in the UK at the weekend. 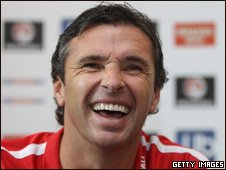 Gary Speed will be greatly mourned

The 42-year-old former midfielder won 85 international caps and had been national team boss for 10 games, 5 of which his team won.

Speed made his name at Leeds and played a key role 关键角色 as United won the First Division title in 1992.

He left Leeds in 1996 after 312 appearances to join Everton, whom he went on to captain in a 3.5 million pound (approx 35 million RMB) move.

In 1998 he joined Newcastle in a 5.5 million pound (approx 50 million RMB) switch. During his six years with the team he enjoyed a taste of Champions League football 欧洲足球俱乐部冠军杯联赛.

He led by example. He was inspirational and that's why we are all feeling it so bad - we couldn't see it coming.

He then spent four years with Bolton Wanderers after agreeing a £750,000 (approx 7.5 million RMB) move and his final move of his playing career 球员生涯 was to Sheffield United before injury forced him to retire in May 2010.

He took over the Wales job later that year, despite having just four months' managerial experience 管理经验, but the team had started to make impressive progress under his stewardship 管理.

Only this month, his team had its third successive win, beating Norway 4-1 in a friendly match.

The news that he was found hanged at his home at the weekend has shocked the sporting world. His former Wales team-mate, John Hartson, said that "...he led by example. He was inspirational 鼓舞人心的 and that's why we are all feeling it so bad - we couldn't see it coming."

Similar heart-felt sentiments 由衷的感想 have been coming from beyond Speed's adopted footballing homeland. Former England captain David Beckham said: "He was an amazing and talented player, one who had a glittering career 光辉的职业生涯, and he had just started a great career in management."

He was an amazing and talented player, one who had a glittering career, and he had just started a great career in management.

His death has touched people outside the beautiful game. The British Prime Minister, David Cameron, said he was deeply saddened to hear the news. He said Gary Speed "...was greatly respected by football fans across the country."

Some of those fans mourned his death on Sunday by holding a one minute applause 鼓掌一分钟 as a mark of respect 以示敬意 before the start of the match between Welsh club Swansea and Aston Villa.

Speed, who was awarded the MBE in the 2010 Birthday Honours, leaves a wife and two children.