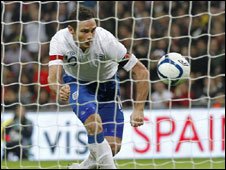 Lampard headed in from close range 近距离 in the 49th minute. Spain dominated possession 垄断控球 and territory for long periods and almost equalised 拉平 late on but England held on with resilience 不屈不挠的精神 for a win that will inject new reserves of confidence into Fabio Capello's side.

The gameplan - to stop Spain scoring - was spot on. England defended magnificently.

He went on to caution against over optimism: "We need to make sure we don't get carried away. We need a sense of realism."

Despite this victory England will not leap into the list of favourites for Euro 2012. Although Spain are European and World Champions they do not have a great record in international friendlies 国际友谊赛 since winning the World Cup. However England will take heart 提升士气 from this win as they prepare to face Sweden in another friendly this week.

We need to make sure we don't get carried away. We need a sense of realism.

Tuesday's game sees the return of Chelsea's John Terry to the role of captain. Rested 休赛 for the game against Spain he will be in the international spotlight 国际关注焦点 for the first time since becoming embroiled in 卷入a race row. He is alleged to have made racist comments 有种族歧视性的言论 to an opponent during a recent game. The case is under investigation but in the meantime Terry is free to play and boss Capello says he believes Terry is in the right frame of mind to lead England.