Manchester United have renamed 重新命名 the North Stand 看台 at Old Trafford the Sir Alex Ferguson Stand in recognition of 以示表彰 his 25 years as manager of the club. 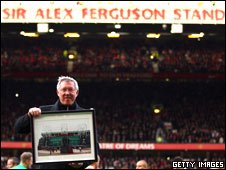 Ferguson was given a guard of honour 仪仗队 by his own players and visitors Sunderland as he made his way 走向 on to the pitch for Saturday's Premier League game.

The club also announced that a statue 雕像 of the Scot 苏格兰人 would go outside the stand before the start of next season.

I felt really honoured and emotional when I saw my name on that stand. I must say thank you to the club for that. My assistant didn't tell me - so he's sacked!

Chief executive David Gill announced that the stand was to be named in Ferguson's honour 以弗格森的名义 on the pitch before the match against Sunderland, which United won 1-0 thanks to an own goal 乌龙球 from their former defender Wes Brown.

Following a standing ovation 长时间起立鼓掌 from the crowd, the manager declared his pride at working for "the best club in the world".

After the match Ferguson said he was honoured to have had the stand named after 根据某人的名字而命名 him. "It was a surprise for me today, I didn't expect that. I felt really honoured and emotional when I saw my name on that stand. I must say thank you to the club for that. My assistant didn't tell me - so he's sacked!"

Ferguson joked that he would sack 开除 his assistant because he didn't tell him that such an honour was being planned.

When asked for the most memorable 难忘的 moment of his 25 years in charge 掌权, Ferguson said: "I'll never forget Barcelona. Never." He was talking about the night when Manchester United won the 1999 Champions League final against Bayern Munich with two injury-time 伤停补时阶段 goals. The game was played at Barcelona's stadium, Camp Nou.