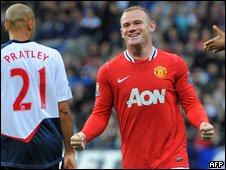 Wayne Rooney bagged 获得 a hat-trick and Javier Hernandez scored twice as a rampant Manchester United outclassed 远远超越 Bolton Wanderers to go to the top of the Premier League this weekend.

The champions took an early lead when Hernandez pounced 突袭，猛扑 at the near post.

Rooney converted 转变 Phil Jones's cross to make it two, then the England striker profited 获益 from another of the defender's runs to put a third in the back of the net 进球.

Hernandez swept in a fourth before Rooney scored his third goal. The scoreboard said it all: Manchester United 5, Bolton Wanderers 0.

Once we got the first goal we kicked on, took our chances and fully deserved the victory.

"Once we got the first goal we kicked on, took our chances and fully deserved the victory", said Rooney.

And the striker became only the fourth player in Premier League history to score hat-tricks in back-to-back games 一场紧接另一场的比赛.

Manchester United's manager, Alex Ferguson, said of Rooney: "He is in great form 极佳状态 at the moment. He is absolutely 100% fit. He is really looking very very sharp and he and Chicharito (Javier Hernandez) were just a handful 一些 for their opponents."

He is in great form at the moment. He is absolutely 100% fit. He is really looking very very sharp and he and Chicharito were just a handful for their opponents.

It's a tribute from a manager who less than a year ago was at odds 有矛盾的 with the player and left him out of the starting starting line-up 出场阵容 for Manchester United's match with Everton. In those days the England striker caused some controversy and was frequently on the front pages of tabloids for the wrong reasons.

"I think the important thing is that he is starting to mature 成熟。He is 25 years of age now. In those years when players get to their mid-20s, they start to get better timing, better authority in his game", says Ferguson.