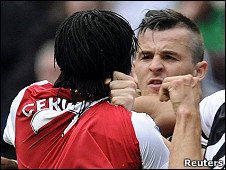 Joey Barton picked Gervinho up by his shirt.

The first weekend of matches in England's Premier league has come to an end with a few surprises and a few familiar stories.

Champions Manchester United started with a victory and three points but potential rivals 潜在的对手 Liverpool, Chelsea and Arsenal could only manage draws.

Arsenal found themselves frustrated by a Newcastle side and their own apparent unwillingness to shoot at goal. They dominated possession 控制比赛局势，占上风 for long periods of the match but lacked the killer instinct 没有像杀手般敏锐的直觉 in the final-third 在禁区附近。

I don't understand the red card, I am 100% sure the referee did not see what happened.

Their cause wasn't helped by the sending off of new signing Gervinho. After falling over in the box in an attempt to win a penalty he was hauled to his feet 从地上被拽起来 by an irate 发怒的 Joey Barton. The combative 好斗的 Newcastle midfielder was incensed 被激怒了 at what he took to be a blatant dive 再明显不过的假摔动作。 This led to a fracas 吵闹 during which Gervinho lightly slapped 打耳光 Barton on the face. Barton fell to the ground, holding his head as if he had been seriously injured.

"I don't understand the red card," said Wenger. "I am 100% sure the referee did not see what happened.

I've been hit harder by people at school.

"I think he has his back turned to the incident. If he had seen it, he would have sent both of them off, or nobody."

Joey Barton was booked for his part in the altercation 争辩 and later said:

"I shouldn't have lifted Gervinho up by his shirt and that's not the correct thing to do."

He also went on to comment about his reaction to being slapped:

"I've been hit harder by people at school but that doesn't make what he did right or wrong."

There may yet be further repercussions 后果 related to this incident, but one thing is for sure, the 2011 / 12 season has started if not with a bang, then at least with a slap.