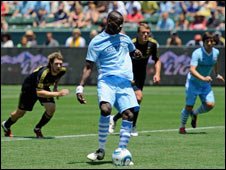 Mario Balotelli tried a trick shot, but it went wrong

Manchester City's Mario Balotelli was taken off in the first half of a pre-season friendly 季前友谊赛 at LA Galaxy for not taking the game seriously.

The 20-year-old Italian striker was through on goal 进球机会就在前方 but, instead of shooting, decided to try a trick shot by backheeling 用脚后跟踢球 it into the goal. The only problem was… he missed.

"I hope this is a lesson for him. If you are serious, you can play 90 minutes. If not, you can come and sit by me on the bench," said City boss Roberto Mancini.

Mario is young. I want to help him and that is the end of it.

City won a third game of their pre-season tour of the United States, shading it 微小的胜利 7-6 on penalties after it had finished 1-1.

But the match was overshadowed 使…黯然失色的 by Balotelli's showboating 卖弄炫耀, which prompted jeers 嘘声 from the crowd.

Mancini argued with Balotelli as the forward left the pitch. Prior to his removal, the young striker had scored a penalty. But it wasn’t enough to keep him out of the manager’s bad books 不惹经理厌烦。

Balotelli threw his water bottle onto the floor after eventually taking his place in the dug-out 教练和替补队员席 and did not appear to watch the second half.

"Mario is young, I want to help him and that is the end of it. To take him off after 30 minutes is enough punishment. It won't have been easy for him but it has to be a lesson," added Mancini.

I hope this is a lesson for him. If you are serious, you can play 90 minutes.

And he was also involved in a prank 恶作剧 where he threw a dart 标枪 at a City youth team player last March.