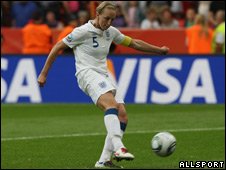 In a manner oh so familiar to the men's team, England's women have been knocked out of the FIFA Women's World Cup at the quarter-final stage.

Their opponents France had dominated in normal time 正常比赛时间 but England took the lead against the run of play 强势反弹，力挽狂澜 shortly after half-time.

They were three minutes away from a place in the last four when the French equalised forcing extra-time. The extra 30 minutes saw no further goals so cue the agony and ecstasy of the penalty shoot-out 最后胜负由令人兴奋又紧张的点球大战来决定。 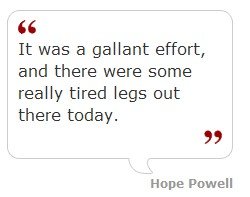 England looked to be favourites as the first French spot kick 点球 was saved and England netted 得到了their first three kicks. England's fourth kick was dragged wide of the post and as France scored with their fifth it meant the pressure was on the last England penalty-taker. Score and the shoot-out would enter sudden-death 突然死亡法，miss and the French would be celebrating. Captain Faye White stepped up and her powerful shot slammed 猛撞 against the bar and away from the goal.

As she turned around, head in hands, the French team were jubilant.

White described her missed penalty as "the worst feeling to ever have to feel in sport."

The England coach, Hope Powell, was disappointed but pleased with her team's performance:

"It was a gallant effort 极大的努力 and there were some really tired legs out there today. Our games have been tough and we were dead on our feet 累得筋疲力尽 at the end.

"I am very proud of my players. They did their very best to take it to the wire 竭尽全力。 Unfortunately when it came down to penalties, you just had to applaud France."