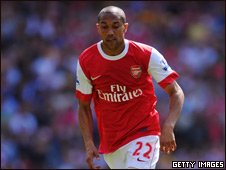 Gael Clichy has played for Arsenal since 2003

The 25-year-old full-back who joined the Gunners 枪手 from French club Cannes in 2003, is out of contract 合约期满 at the Emirates Stadium next summer.

Clichy reportedly told Arsenal he wanted to leave last month, and had been linked with Liverpool and Roma.

But City are rivals for his signature 争着要他的签名（和他签约）， with the deal reportedly worth £7m.

Midfielder Sami Nasri has also been tipped to leave the club 被透露将要离开俱乐部，and is thought to be a target for both Manchester City and Manchester United. 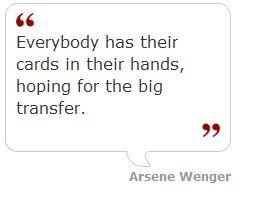 The Gunners, who return for pre-season training 赛季前训练 this week ahead of a tour of Malaysia and China, have been strongly linked with a move for Bolton defender Gary Cahill.

"We are in a waiting period, everybody is waiting," said the Arsenal boss in an interview with Alsace TV.

"Everybody has their cards in their hands, hoping for the big transfer. There is nothing moving yet. The period will be more active at the end of July when we will need to really strengthen the team."