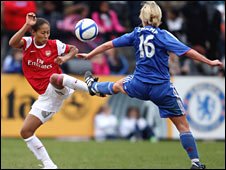 Women's football in the UK has scored one of its greatest successes with the announcement that the FA will support professional women's teams for a new Super League.

"We're here at last," England women's coachE Hope Powell told the BBC, when she highlighted the various "positives" of the new league.

She believes that making women's football professional will help to "showcase" the sport independently of the men's football season in the UK.

It will help to raise standards across the board.

According to Powell, the Super League will provide greater opportunities "to attract sponsorship deals" to bring more money into the women's game.

"There's lots of avenues 很多途径、手段 for us to make a really good product," she added.

Having pro women's football in England will allow "players the opportunity to earn a living out of the game," Powell explained, something which hasn't been feasible before now.

"It will help to raise standards across the board 全面的，总体的，" she said.

It's given us a real chance to elevate the [women's] game.

At present, some members of the England women's squad play for US clubs, giving them a considerable distance to travel for national duty.

Powell suggested that having the chance to play professionally for an English club could encourage more female players to liveEn full-time in the UK.

Ever pragmatic that there may be further hurdles ahead, she was measured when talking about the value of the FA's investment.

"It's given us a real chance to elevate the [women's] game. [However] the proof will be in the pudding, going down the line 我们会在不久的将来通过实践见分晓的，" she mused.

The upcoming World Cup in Germany will provide a significant challenge for England's women's team, but Powell says her squad "will just aim to do [their] very best".