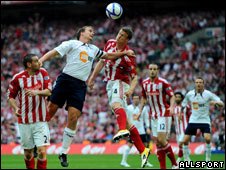 Bolton Wanderers Captain Kevin Davies apologised profusely to fans both in post-match interviews and on the social networking site Twitter.

Davies told BBC Sport he was "ashamed and embarrassed" after their 5-0 FA Cup semi-final defeat at the hands of 在… 的手下 Stoke.

He continued to apologise later in the day on Twitter.

"I am so sorry to all of you who came to support us and paid a lot of money. I am deeply upset and lost for words 无言以对。 Deserve the criticism," he tweeted.

I am so sorry to all of you who came to support us.

In speaking to reporters post-game, he also drew a parallel between 把某物与某物划等号 Bolton's performance and a casual kick around 随便踢球。

"It was a horrible experience, the manner of the defeat. The first goal was like something from five-a-side rather than an occasion like this."

To compound their misery 让他们更为痛苦， former team mate Jonathan Walters scored twice against them sin the second half.

Davies, a losing semi-finalist with Chesterfield in 1998, believes his dream of lifting the FA Cup is over.

We haven't performed anywhere near what we are capable of.

"It is one of those things. It seems to have got away from me. This was probably my best chance of getting to the final," he said.

Bolton manager Owen Coyle was at a loss to explain his side's implosion, but admitted that his players let themselves down badly.

"We haven't performed anywhere near what we are capable of," said Coyle.

"We gifted the goals and we capitulated. If we offered that every week we wouldn't be in the Premier League," he added.