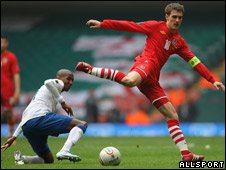 Aaron Ramsey (red shirt) was disappointed to lose against England

Ramsey said: "It's no excuse, but the pitch didn't help as well. It was a bit dry on the surface and we couldn't get any pace in our attacks."

Ramsey, who led his side for the first time, admitted Wales lacked consistency during the 2-0 Euro 2012 qualifier loss.

I think against a team like that [England] you can't give away sloppy goals.

The Arsenal star was making his first Wales appearance since recovering from a serious leg injury.

He said: "Obviously we had a slow start and it was a mountain to climb from there… It was very disappointing."

Recognising that a strong team relies on its supporters, Ramsey praised their fans for being "fantastic" and "outstanding".

Swansea defender Williams said: "I think against a team like that [England] you can't give away sloppy goals 由于糟糕的防御而让对方进球… I think that's what we did - two sloppy goals at the start. We didn't start very well, they did start well."

It's no excuse, but the pitch didn't help.

Defender Chris Gunter said: "As the manager's [Gary Speed] been saying all week, even though this game is massive and we all desperately wanted to win the game and give something back to the fans, there's a bigger picture 大局/总体… This was just a first small block in a long road 一条长路上的第一个小障碍 under the new manager."

He remarked to reporters that a full stadium makes a big difference to the squad's morale.