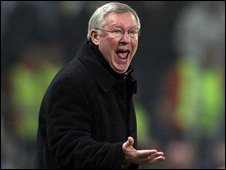 Sir Alex Ferguson has sometimes been critical of Premiership referees

Manchester United manager Sir Alex Ferguson has hit back at attacks from other football managers over his attitude towards referees.

Dalglish said he and his staff adhere to the Respect campaign that urges managers to support officials.

In a Daily Express article, Taylor commented of Ferguson that "sometimes his conduct is not what you would expect of a manager of his stature".

Sometimes his conduct is not what you would expect of a manager of his stature.

Ferguson said Taylor's opinions as a pundit did not stand up to comparison with 不符，不一致 his conduct while England boss during a 1994 World Cup qualification defeat by the Netherlands.

"I was disappointed with Graham Taylor, who wrote that I had to take 'the rough with the smooth 好事坏事都接受'," Ferguson added.

"I think back to when he was England manager and was complaining to a linesman: 'The referee has got me the sack 被解雇。'"

The United boss insisted that the decision for none of the club's coaching or playing staff to speak to the media after their 3-1 defeat by Liverpool, was not evidence of a deepening crisis.

It has been a tumultuous week, but we will get over it.

"It has been a tumultuous week 无秩序，混乱的一周, but we will get over it," said Ferguson, who is also preparing to face Marseille in the last 16 of the Champions League on Tuesday.

"Don't read too much into 不要思考太多 the fact that I withdrew my briefings for the media… At that particular time I didn't think we would win the media battles, so I retreated," he said.

Ferguson is confident, however, of securing a positive outcome from his FA hearing into his comments on Atkinson's performance in the Red Devils' defeat by Chelsea.

"I will be defending myself strongly when my FA appeal hearing comes up," he added.