Wolves manager Mick McCarthy questioned referee Mark Halsey's decision to disallow a goal for his side during the 3-3 draw against Tottenham. 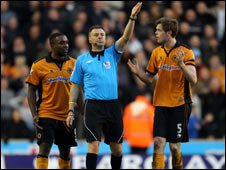 Wolves' players made their feelings known to referee Mark Halsey

With his team trailing 3-2 落后， Wolves' Richard Stearman was deemed to have fouled Spurs keeper Heurelho Gomes when the ball came in from a free-kick.

"We've had a good goal disallowed, no question about that," said McCarthy.

He was clear that the referee "got it wrong" on Stearman's challenge and added "it's almost like toeing the party line 跟随上级的意思去做某事 on the goalkeepers."

We've had a good goal disallowed, no question about that.

According to the Wolves boss, Stearman had "challenged fairly" and that the goal "should have stood 本应算数". "If anything, it would have been a penalty to us, because he made a hash of it 搞砸了， the goalkeeper," he told reporters.

A late goal from substitute Steven Fletcher in the 86th minute secured a draw for Wolves.

If anything, it would have been a penalty to us.

"To equalise in the final minutes and the second half performance we've produced, I've got be happy," he said, "I might not have been as magnanimous 宽大的 about it otherwise."

And while the Wolves boss suggested Spurs "should have had one sent off", he followed up 紧跟着表示 immediately saying he wasn't in favour of players being sent off.