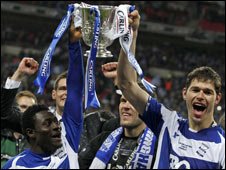 Birmingham boss Alex McLeish said his side's Carling Cup final victory over Arsenal at Wembley was his "greatest achievement" as a manager.

Obafemi Martins scored in the last minute of normal time to complete a 2-1 victory over the Gunners.

"I am so pleased for the fans, they have craved victory for a long time," McLeish told BBC Sport.

"Relatively speaking, it is my greatest achievement. For a small club like ours to beat Arsenal was a titanic effort 巨大成就，" he added.

Previously, McLeish led Rangers to two championships and five cup wins in five years at Ibrox and managed Scotland to a famous victory over France in 2007.

I am so pleased for the fans, they have craved victory for a long time.

He compared the scale of the challenges he had faced in Scotland, with what he was up against 面对的挑战 as Blues boss.

"With Rangers I was expected to win trophies, even though it is difficult against Celtic. To come to England and for a club like Birmingham to beat the might of Arsenal 阿森纳的强大实力 is a dream come true 梦想实现，" he said.

"It is especially so for the fans who have had a long wait, those long-suffering Blues fans. No-one gave us a prayer 没人为我们祈祷， we were underdogs 弱者， but sometimes the bookies 博彩公司 don't get it right."

Thank God it fell to Oba. He doesn't miss from there.

Goalkeeper Ben Foster made some crucial saves to keep Birmingham in the game.

"The main thing was that the lads kept fighting. You could see how tired we were, but we just kept working and working. That's the spirit we've got," he told reporters.

On the 89th minute goal, which sealed their victory 最后敲定他们的胜局， Foster added: "Thank God it fell to Oba. He doesn't miss from there. I think I could have scored that."

Right-back and Blues captain Stephen Carr stated that the mindset 思维 of the Midlands outfit helped them win the trophy.

"We knew if we got right in [Arsenal's] faces we could get the result. We kept going and we just got that little bit of luck at the end," he said.