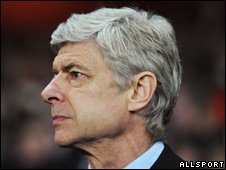 Arsene Wenger admitted the Arsenal squad could do with a "breather" 需要喘口气 so his players don't get tired out.

Their shock 1-1 draw with Leyton Orient at the weekend has forced an FA Cup replay.

"Since December, we've played every three days… so sometimes to have a week where we could give the players a little breather would not be bad."

The Gunners, who made 10 changes to the side that beat Barcelona in midweek, have already played 42 times this season and must now turn their attentions to 把注意力转向 five games in a 14-day spell that could shape their season as they look to maintain a challenge on four fronts 即将来临的四场比赛。

And while Wenger has some concerns about the growing fixture list, he was satisfied with the performance against Orient.

"We have played the game with the right attitude and could not fault our fighting spirit 拼搏精神， but you also have to give credit to Leyton Orient because they never gave up and fought very hard," said the Frenchman.

We have played the game with the right attitude.

Although a replay may have been the last thing Wenger wanted, Orient insisted it was a fair reward for the effort they put into the tie 平局。

Orient's manager Russell Slade expected "to lose with a bit of dignity" but got a good return on his team's seventh outing in the current FA Cup.

"We nearly went out in the first round, but to hang in there 坚持住... it's the same in the league, it's one defeat in 21. You have to be happy with that," he said.