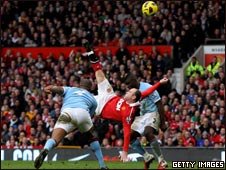 Wayne Rooney called it the "best goal" he has ever scored.

Manchester United striker Wayne Rooney said his overhead strike 凌空抽射 that secured a 2-1 derby win 在同城两队比赛中获胜 over Manchester City was the best of his career.

Nani crossed the ball to Rooney, who connected with a right-foot volley that flew into the top corner from 15 yards.

"As soon as I hit it, I knew it was in and it's definitely the best goal I've scored," Rooney told BBC Sport.

He continued: "It was a special feeling. The fans deserve that from me because I've not had the best of seasons" 一度成绩不佳。

The fans deserve that from me because I've not had the best of seasons.

Knowing that the Manchester derby was a big day for United fans, Rooney was keen to show he is back on top form 恢复最佳状态。

"Hopefully I can keep scoring now and help us get that title back."

However, Rooney's late strike 最新进球 sent United seven points clear at the top of the Premier League table, and eight points ahead of City.

Hopefully I can keep scoring now and help us get that title back.

United boss Sir Alex Ferguson was gushing in his praise 盛赞 for Rooney's goal, calling it the best he has seen at Old Trafford.

"It was stunning," he said. "Unbelievable… we've had some fantastic goals here but in terms of execution, you'll never see that."

"We played very well… we were unlucky but you can see a positive future 乐观的未来 and it is important we continue to play like this," he said.