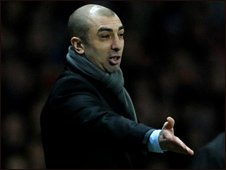 West Brom manager Roberto Di Matteo has been relieved of his duties 解除职务 and put on gardening leave 带薪休假 with immediate effect.

The club's board said a run of 13 defeats in 18 games was the reason for the decision.

In a statement via the League Managers Association (LMA), Di Matteo said: "I was extremely surprised and disappointed to be relieved of my duties."

I was extremely surprised and disappointed to be relieved of my duties.

He added: "Our poor sequence of results stretches back more than three months and there has been little sign of it coming to an end… if this run continues much longer, achieving our goal of retaining our Premier League status will become increasingly difficult. That is why we felt compelled 迫于压力的 to act now.

"This club's track record 比赛成绩记录 proves we do not take such decisions lightly 从不草率下这样的决定， with Roberto being only our fourth manager or head coach in almost 11 years," he said.

This club's track record proves we do not take such decisions lightly.

LMA chief executive Richard Bevan said it was a shame that Di Matteo was not being given the opportunity to see out the season 坚持到赛季的最后 at the Hawthorns.

"Roberto represents yet another victim of the 'hire and fire' mentality “想聘就聘，想解雇就解雇”的状况 that pervades 蔓延 in our game," he said.

He continued: "The club has big games ahead, against Wolves and West Ham, and you have to question the decision to sack the manager. It is in exactly situations like these that we all want to see clubs back the individuals they have employed rather than see the sack as a quick fix 速效解决办法。"

While Jeremy Peace thanked Di Matteo for "his efforts… particularly for his contribution towards last season's promotion success," he emphasised that in "a results-driven industry 只看结果的行业，" the board "felt we had no choice but to act now."