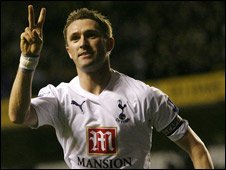 Football clubs across the UK are scrambling 混乱 to secure some last-minute deals 最后一刻的交易 ahead of the transfer deadline at 2300 on Monday.

West Ham might be hovering dangerously close 险近 to relegation 降级区 but they have had success in signing Tottenham striker Robbie Keane on loan until the end of the season.

Chairman David Gold said the club was "delighted to sign a world-class striker," even if it was a tough deal to strike 与某人达成协议。

"Tottenham chairman Daniel Levy drives a hard bargain 条件很高 but we've got our man," he continued.

If they avoid relegation, the Hammers then have the option to keep Keane at West Ham for a further two years.

Keane told reporters he's not ready to hang up his boots just yet.

"I feel I have plenty left to offer at the highest level for at least the next four or five years," he said, drawing attention to his success while on loan to Celtic.

Meanwhile, the League Managers Association (LMA) has called for an end to the January transfer window.

I feel I have plenty left to offer at the highest level for at least the next four or five years.

"It doesn't do what it was looking to when it came in," he explained, "it doesn't create stability, it doesn't create a level playing field 平等的赛场， and certainly, in the Football League, they are very keen the domestic window is removed."

Bevan believes that some sacked 被解雇的 managers could have been saved, were it not for the pressure imposed by the January deadline.

"I'm sure you'll find chairmen who will say the transfer window was a final nail in the coffin 板上钉钉 of some decisions that they had to make in terms of sacking managers or coaches," he told reporters.