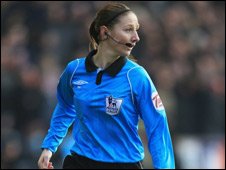 A TV football host and pundit 评论员 have been slammed 被猛烈抨击 for their comments about a female assistant referee.

Sky Sports has said that off-air remarks made by host Richard Keys and pundit Andy Gray about female assistant referee Sian Massey were "not acceptable".

Believing their microphones were off, the pair agreed female officials can't make an offside call.

Massey was the assistant referee officiating 行使职责 at the Wolverhampton and Liverpool Premier League clash.

We have spoken to Richard and Andy...they have apologised and expressed their regret.

Mr Keys said "somebody better get down there and explain offside to her" and Mr Gray remarked "women don't know the offside rule".

Mr Keys then said "of course they don't".

In a statement, Sky said:

"The comments are not acceptable. They were not made on-air but we have spoken to Richard and Andy and told them our views and they have apologised and expressed their regret 表示懊悔。"

(We) will continue to offer every encouragement to all officials within the football family.

The Football Association has given its support to Ms Massey, 25, who made a correct borderline 边线球 call in the build-up to Liverpool's first goal at the Molineux stadium in Wolverhampton.

An FA statement said it had made "real strides 很大的进步 in encouraging both male and female match officials to enter the game at every level, and will continue to offer every encouragement to all officials within the football family to progress to the highest levels possible".

"We are proud to have some of the world's best match officials, both male and female," the statement continued.

Across England, there are currently 853 female referees, ranging between levels 1 and 8. The FA described its female match officials as "fantastic ambassadors for the game".