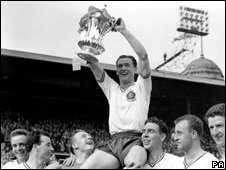 Football was in mourning 在悼念中 on Sunday morning with the sad news that former Bolton Wanderers and England striker Nat Lofthouse had died.

"He was a one-club man and our football club meant as much to him as he did to us," said chairman Phil Gartside.

Lofthouse OBE, who worked in various roles for Bolton after he hung up his boots 挂靴、退役, also scored 30 goals in 33 matches for England.

He was a one-club man and our football club meant as much to him as he did to us.

He was club president at Bolton when he passed away at the weekend.

"I would like to extend our deepest condolences 表达我们最深的哀悼 to Nat's family, who are very much in our thoughts 让我们挂念 at this time," added Gartside in a statement on the club's website.

"We will miss him but we will celebrate his life, his legacy 遗产、遗留财富 and great times that he brought to Bolton."

Manchester United legend Sir Bobby Charlton led the tributes to one of the sport's true greats.

"The first time I saw a professional game was at Newcastle and Nat Lofthouse was playing," Charlton told BBC Radio 5 live's Sportsweek programme.

Nat Lofthouse loved the game of football. He was ever so proud to be a part of it.

"He was a leader, he had fantastic ability in the air and he was strong. He was a talisman 制胜法宝… I played about four or five games with him with England at the end of his career and I felt that he was the one that was in charge."

Sir Bobby said Lofthouse was a player of great strength and of another era:

"It was a hard game then. It wasn't like today, it was so tough. The pitches were bad, the ball was heavy, the equipment was awful but Nat Lofthouse loved the game of football. He was ever so proud to be a part of it."

Nat Lofthouse's bravery had clearly left a lasting impression on an emotional Charlton who described his many visits to Bolton as "one of the highlights" of the year.