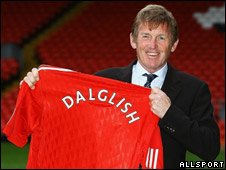 Dalglish is boss at Liverpool

The dust didn't even have time to settle 尘埃还没落定 on Roy Hodgson's departure from Liverpool before bosses announced their interim manager on Saturday.

And so Kenny Dalglish has returned as Liverpool skipper 队长， 20 years after he last held the same job.

In a statement on the club's website, owner John W Henry said:

Kenny was not just a legendary footballer, he was the third of our three most successful managers.

"We are extraordinarily fortunate and grateful that he (Kenny) has decided to step in during the middle of this season."

The 59-year-old Dalglish won eight league titles with Liverpool as a player and manager, when he was previously in charge of the club between 1985 and 1991.

"Kenny was not just a legendary footballer, he was the third of our three most successful managers - three giants," said Henry, who bought Liverpool in October.

I am very sad not to have been able to put my stamp on the squad.

Meanwhile Roy Hodgson said the last few months have been some of the most difficult in his career.

Hodgson, 63, won only seven of 20 Premier League games after taking over from Rafael Benitez in July 2010 and led the club to 12th in the table.