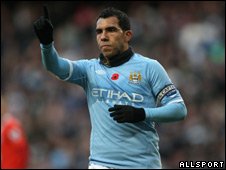 Tevez wants to live near his family

He signed a contract that's estimated to be worth tens of millions of pounds, and which still has three-and-a-half years to run.

And while a statement from Carlos Tevez stressed he has "no personal issue" with the manager Roberto Mancini, the striker has made it very clear he doesn't see his future 预见他的未来 as being at Manchester City.

"It is something I have felt for some time and have spent many hours thinking this through", the striker said.

This is both an unfortunate and unwelcome distraction.

However, the club already rejected a written transfer request 转会申请 where he told bosses he wanted to leave to be closer to his family in Argentina.

A statement issued by Man City on Sunday said:

"This is both an unfortunate and unwelcome distraction 令人失望并分心的事情， and the club will remain focused on the games ahead in what is turning out to be a very promising season 大有希望获胜的赛季".

I...have spent many hours thinking this through.

While Tevez has refused to be drawn on 谈论 the specifics of the individuals he has clashed with, he emphasised that his relationship "with certain executives and individuals at the club has broken down and is now beyond repair 无法修补".

Club management are playing hardball 向某人显示强硬态度 with Tevez and say they will seek compensation for breach of contract 违约 if the striker refuses to play.

The Argentinean has been an integral part 必不可少的一部分 of Man City's growing success since joining from rivals United in the summer of 2009, following a two-year spell at Old Trafford.

City have stated "the door remains open 大门依然敞开 for Carlos to be selected to play" but his determination to leave the club may make it difficult for Mancini to include Tevez in the team.