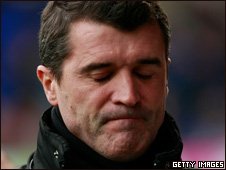 Roy Keane insists he's at fault 有责任 for Ipswich Town's poor performance, which has seen them lose eight of their last 10 league games.

The Town boss watched his side lose 3-1 at home to Swansea on Saturday.

"As much as we can blame individual mistakes I'm ultimately the manager, I pick the team, I brought some of the players in," he told BBC Radio Suffolk.

"We can't keep making these excuses 找借口 and there will be a point where we say enough is enough 够了, Roy said.

As much as we can blame individual mistakes, I'm ultimately the manager, I pick the team.

Keane, whose contract is up in the summer, has come under increasing pressure from supporters to turn around his side's fortunes.

In spite of this pressure, he said the fans are "a credit to the team".

The former Manchester United and Ireland footballer conceded that "eight defeats out of 10 is unacceptable for a top club like Ipswich".

"It doesn't matter if I have a week or 10 years left on my contract, I do look at my position every day," he said.

Describing the performance as "pretty decent" 还算过得去, nonetheless he found the game was "frustrating" overall 总体上令人失望的。

Ipswich were in fifth place in early October, when they had a 2-1 win at home against Leeds. Since then, they've been in freefall down the table.

Eight defeats out of 10 is unacceptable for a top club like Ipswich.

But having only succeeded in getting six points from a possible 30 available, and now in a paltry 无足轻重的 17th place, Keane knows relegation is a real possibility for the club.

"We're being sucked in 难以脱身," Keane said. "I still think I saw enough in the performance [against Swansea] and the attitude to think we're a decent team".