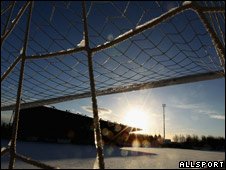 Some matches were cancelled due to the strike

Top referees from category one in Scotland refused to work at football matches on Saturday and Sunday.

They are unhappy that their integrity is being continually questioned and, despite assurances from the SFA that it would take a firm line 采取强硬立场 with critical clubs, the officials refused to call off their strike.

We have recognised that we do need to support referees more.

"We have recognised that we do need to support referees more and we have made a certain number of offers to do that… if we can put those measures in place 让措施到位, we can satisfy the referees that we are taking their point seriously."

While all four Scottish Premier League matches went ahead with officials from other countries, 10 Scottish Football League games were called off.

Scottish referees have already made it clear that they will be working as usual next weekend.

Regan is determined to push ahead with the promises made to the disgruntled 心怀不满的 match officials.

It was always our intention to take a time out, have a moment of reflection, then get back to normal next Saturday.

"We will be very tough on any player who challenges or abuses referees in a way that is unacceptable," he continued.

"It was always our intention to take a time out, have a moment of reflection, then get back to normal next Saturday."

While he appreciated things "won't change overnight" 不会昼夜间改变, he said it was important to "work towards a climate 气氛/氛围 where we can have an open discussion with clubs and players".

McKendrick hopes that "next weekend there will be a different atmosphere towards referees" and that all eyes will be on the ball, not the match officials.