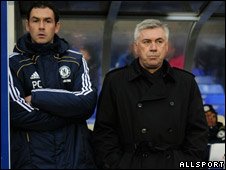 Carlo Ancelotti has no plans to quit.

Despite a third league defeat in four matches, Chelsea boss Carlo Ancelotti says there is no reason to lose confidence.

The champions lost 1-0 at Birmingham on Saturday but still head the Premier League table on goal difference.

"The fact that Ray had gone did not affect things," he stated.

I said when we were doing well that there would be difficult moments ahead. This is one of them.

Chelsea only lead Manchester United on goal difference, but Ancelotti was full of praise for his team's performance at St Andrew's in Birmingham.

He suggested stiff competition 激烈竞争 and the fact that "more teams believe in themselves" meant staying on top保持领先was a tough challenge.

"A month ago I said when we were doing well that there would be difficult moments ahead. This is one of them," Ancelotti said.

Meanwhile, Birmingham manager Alex McLeish was full of praise for his goal-keeper, Ben Foster, who made a series of top-class saves一流的救球to keep Chelsea at bay.

"I've always said a good keeper is paramount. He can win you championships, earn you points, save you points, or keep your team in the division," McLeish said.

We have had plenty of bad luck this season so far. Maybe we got a bit of luck today.

Echoing Ancelotti's sentiment 附和安切洛蒂的观点， McLeish also suggested that there was a large dose of luck in play 比赛中很大的运气成分 for top Premier League teams at the moment.

"We have had plenty of bad luck this season so far. Maybe we got a bit of luck today," he said.

Away from talk of luck, Ancelotti was quick to distance himself 让自己迅速远离 from rumours he is about to quit the club.

He told reporters that he was "under pressure" but "focused" on his job to ensure his team gets some better results.

"There's no reason to think about my position. It's very clear. I am the coach… I have my contract until 2012, here, in this club. I've said a lot of times that I'd like to stay here," he said.