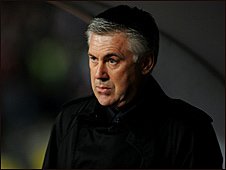 Chelsea manager Carlo Ancelotti admitted his side's 3-0 defeat by Sunderland was the worst performance in his time at Stamford Bridge.

While 尽管 they're still at the top of the table, Chelsea have had their Premier League lead cut to two points following Sunday's game.

"We have to meet about this on Thursday after the international break to look at what happened," said Ancelotti, who took over at Chelsea in June 2009.

It's the Blues' third league loss this season, but their first at home.

All the things were wrong. We didn't play how we wanted to.

Ancelotti said it had been downhill from the off in the match 从比赛一开始就走下坡路:

"All the things were wrong. We didn't play how we wanted to, Sunderland showed fantastic spirit 展示了极好的精神状态 and played better."

Sunderland manager Steve Bruce was quietly pleased when he spoke to reporters after the game.

"You can talk about tactics 谈论战术 as much as you like, but one thing you have to do against the big teams is show up, take the ball, show a bit of courage 显示出点儿胆量 and a bit of bottle 一点儿信心 and thankfully we've done that today against a very good team," he said.

I hope people talk about Sunderland rather than Chelsea's poor performance. It's not a fluke.

He said Sunderland had "produced a fantastic performance," emphasising it was "not a fluke 侥幸，偶然".

Praising his players, he said:

"All round 总的来说，they all produced a fantastic performance. I hope people talk about Sunderland rather than Chelsea's poor performance. It's not a fluke."

It's been a roller-coaster few weeks 犹如做过山车般惊险的几周 for Chelsea followed a loss at Liverpool the previous Sunday and a 1-0 win over Fulham midweek.

Ancelotti was frank about his team's uneven performances in the last few games.

"One month ago everything was OK. Now we are in difficulty but we have to move on 前进 quickly," he said.