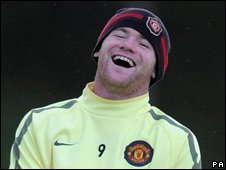 Rooney has signed a new five-year contract with Manchester United.

The striker's future at Old Trafford had been in doubt all week after United's manager Sir Alex Ferguson said that Rooney was not looking for a new deal.

Initially 起初 Rooney seemed to have burned his bridges 过河拆桥，断了后路 with United, but by the end of the week he was being lauded 称赞 by Ferguson for sticking with 坚持留在 the club. So what happened?

I am sure the fans over the last week have felt let down by what they have read and seen.

Speculation 揣测 started last week after an apparent disagreement over the player's injured ankle. Rooney claimed that the ankle was fine, but Ferguson contradicted 否定，反驳 the claim, preferring to keep him on the bench 在替补板凳上 in the weekend's clash against West Brom.

By Monday reports of a breakdown 破裂 in contract negotiations 合同谈判 were rife 多的 and Ferguson confirmed the rumours in a landmark press conference 有重要意义的记者招待会 on Tuesday.

He admitted that he was "dumbfounded" 惊得目瞪口呆的 by Rooney's decision to leave. He added that the "door is still open" 大门依然敞开 to sign a new deal but suggested that the player had not treated the club with sufficient respect 足够的尊重。

But Ferguson was keen for a swift resolution 迅速的解决方案。 "We don't want it to become a saga 一连串的事情，" he said on Wednesday. "What is really important is for us to put it to bed 安顿好。"

We don't want it to become a saga. What is really important is for us to put it to bed.

Rooney was heavily linked 有密切联系 with a number of clubs, including local rival 同城对手 Manchester City, and by Friday Man U supporters 曼联球迷 were protesting 抗议 outside the player's mansion 豪宅。

But on Friday morning Rooney dropped the bombshell 公布一个令人惊人的消息 that he would stay with Manchester United until 2015.

"I am sure the fans over the last week have felt let down 使失望 by what they have read and seen," he said. "It's up to me through my performances to win them over 赢得他们的支持 again."

"It has just been completely surreal 如梦幻般的 for the last seven days," he said.