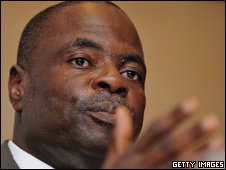 Fifa executive Amos Adamu has been accused of corruption.

Fifa is to open investigations of bribery 贿赂， following allegations that two of its officials offered to sell their votes in the contest to host the 2018 World Cup.

Undercover reporters 卧底记者 from the British newspaper The Sunday Times filmed Fifa executives Amos Adamu and Reynald Temarii seeming to imply that they would be open to bribes.

The information in the article has created a very negative impact on Fifa and on the bidding process.

Adamu, the president of the West African football union, apparently suggested that a direct payment 直接付款 of US$800,000 (5.3 million yuan) to build four artificial football pitches could swing his vote 将他的票投给付款方。 This would be completely against Fifa's rules.

Reynald Temarii, a Fifa vice-president from Tahiti and the head of the Oceania 大洋洲 regional confederation, also intimated （间接）表示 that NZ$3 million (15 million yuan) funding for a football academy in New Zealand could affect his preferences （投票）意向。

The reporters had posed 伪装，冒充 as lobbyists 说客 for a consortium 协会，财团 of American companies who wanted to bring the tournament to the United States.

Fifa will open an in-depth investigation, which we will start immediately.

In the video footage 录像片段， Adamu was asked whether the money for a "private project" would have an effect on the way he voted. Adamu replied: "Obviously, it will have an effect. Of course it will. Because certainly if you are to invest in that, that means you also want the vote."

"The information in the article has created a very negative impact on Fifa and on the bidding process 投票过程 for the 2018 and 2022 Fifa World Cups," he writes. "Fifa will... open an in-depth 深入、彻底的 investigation, which we will start immediately."

A statement from the Oceania Football Confederation said that Reynald Temarii "welcomes a full and thorough investigation so that all the facts can be heard."

England and Russia are bidding for the 2018 finals, along with joint bids 联合竞争申办权 from Spain and Portugal, and Belgium and the Netherlands. The United States pulled out 退出 of the contest last week.