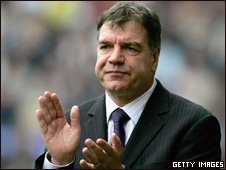 Sam Allardyce says he did not encouage violent tackles.

"I don't agree with what most people are saying," Allardyce said in response to the criticism. "Players are well-behaved 行为良好的 and make life good for the referee in the majority of times."

Allardyce was responding to comments from the former Fulham captain Danny Murphy, who said high-profile 知名度高的 managers should take responsibility 承担责任 for the actions of their players.

Players are well-behaved and make life good for the referee in the majority of times.

Speaking at last week's Leaders in Football conference in London, Murphy said: "You can look at the players and blame 责怪 them. But every team has a captain and a manager who is in charge 负责，主管。"

"It is the managers who dictate 决定，发令 what the players do and how they behave. If you have a manager in control of his team, who doesn't allow these things to go on, you have a more disciplined 遵守纪律的 team."

"You can say they're doing what they can 想方设法 to win the game," said Murphy. "But the fact is that the managers are sending the players out so pumped up 过度兴奋的 that inevitably 不可避免地 there are going to be problems."

It is the managers who dictate what the players do and how they behave.

But Bolton Wanderers striker Kevin Davies, who played under 在 某人旗下效力 Allardyce, has defended his ex-boss against Murphy's criticism.

"Sam never told us, 'Go out and start kicking people,'" said Davies. "Whenever we did team shape with Sam, it was all about pressing 给对方制造压力, not roughing up 粗暴对待 the opposition 对手。"

"That was about getting in their faces 挑衅, not foul play," he said.