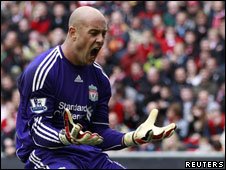 Liverpool continued their abysmal 极糟的 start to the season on Sunday with a 2-1 defeat at home to Blackpool.

Things started badly for the Reds when their star striker, Fernando Torres, limped off 一瘸一拐的走下场 after ten minutes with an injury. It gave the Seasiders 海边人（布莱克普尔的昵称）a boost 增加士气 and they went ahead after thirty minutes with a penalty from Charlie Adam.

Then Luke Varney scored just before half-time, with a powerful shot off a pass from Gary Taylor-Fletcher.

It meant that the Reds went into the dressing room with what their manager Roy Hodgson described as a "mountain to climb".

"[In the] first half we find ourselves 发现我们的处境 two goals to nil down with a goal just before half-time, really giving ourselves a mountain to climb.

"Unfortunately, when you give yourself an uphill task 艰难的任务 with a 0-2 you've got to expect it's going to be very difficult in the second half against a team of Blackpool's quality."

Sometimes it's easier to hold onto something than to claw it back.

Liverpool started the second half well, with a goal from a Sotirios Kyrgiakos header. Hodgson said it "gave us wind in our sails" meaning it helped give the team momentum 动力。But in the end it wasn't quite enough to enable the Reds to claw back 夺回 an equaliser.

"It gave us wind in our sails and it did encourage us to take plenty of chances, the game became quite open... but they're holding on to something and we've got to claw something back and sometimes it's easier to hold onto something than to claw it back."

The loss means the Reds drop to 18th place in the table – the relegation 降级区 zone. It's the latest defeat in Liverpool's worst start to a season for 57 years and one which has also seen them dumped out 淘汰出局 of the Carling Cup by League Two Northampton.

Unsurprisingly, the fans feel their loyalty is being tested 经受考验。Hodgson was brought in following a disappointing period with Rafael Benitez at the helm 掌权，主管。It was thought that following his successful tenure 任期 at Fulham, Hodgson would be a safe pair of hands 有经验的老手 for the beleaguered 处于困境的 club.

Many Kop fans made their feelings clear when they chanted Kenny Dalglish's name on Sunday. Dalglish is a former Liverpool player and manager who has been linked to the top job at Anfield again.

We will come back stronger for this experience.

In reality, Hodgson has a little more time to turn things around. The next fixture is against the local rivals Everton on 17 October. A win there could help the team build bridges 建立关系 with their fans again.

"It is still early days for the manager and we have to keep working but one thing I do know is that we will come back stronger for this experience," he said.