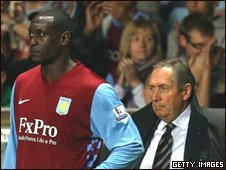 Aston Villa's manager is standing by his striker.

Heskey scored in the 88th minute with a powerful header 有力的头球, to finish the game 2-1 to Villa.

Heskey and Houllier have a long history together; Houllier signed 签约 Heskey for his old club, Liverpool, over a decade ago. The pair were reunited when Houllier took over as Aston Villa's manager earlier this month.

All I ask of him is that he believes in himself, because he has tremendous assets.

"All I ask of him is that he believes in himself 相信自己 because he has tremendous assets 超强技能，" said Houllier.

"All strikers need a lot of confidence and when Emile is feeling confident, then he is awesome 令人瞠目结舌的。"

The game against Wolverhampton was Heskey's first Premier League start 首发 since being injured in March this year.

He also scored for Villa in Houllier's first match as manager: last Wednesday's Carling Cup tie 打平 against Blackburn, where Heskey came on in the second-half 下半场 as a substitute 替补队员。

"He showed a few things in training that indicated to me he was in a good form period 竞技佳境，" said Houllier after the match.

Maybe it is another challenge for him, to win the hearts of the fans again.

"He knows I like him. The attitude of the subs 替补队员 is very important and they came on and brought something 为比赛增添色彩。" Villa won that game 3-1.

Heskey has not always been a fans' favourite 球迷的热门队员 in his two years at Villa but Houllier believes he may thrive 发展 on winning over 赢得 supporters.

"At the end of the day 说到底， maybe it is another challenge for him, to win the hearts 赢得人心 of the fans 球迷们 again," said the Aston Villa manager.

"Because he plays upfront 在前场 and sometimes misses sitters 轻而易举的进球机会， people get on his back 背后指责他 and maybe that has hurt him in the past."

"But Emile fights for the ball in the air, tries to keep it and links up 承前启后 with the midfield."

"His work-rate 跑动量 was phenomenal 令人吃惊的 today and his understanding and movement with Ashley Young is good."