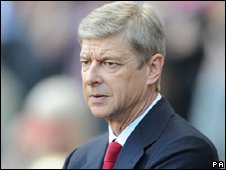 Sunderland equalised 将比分扳平 during stoppage time 伤停补时 to deny Arsenal victory, with the goal being scored in 95th minute after only four minutes of added time had been announced.

"It was outside the four minutes," Wenger told BBC Sport. "I know the referee can give more than four; it's a minimum 最少的 of four minutes. But in the four minutes nothing happened to justify 证明…有理由 the extension 延长 of the time. But I cannot do anything about that."

We controlled the game in the second half, even with 10 men. We never looked in trouble.

Arsenal had taken the lead in the first half, with a goal from the team's captain 队长， Cesc Fabregas, in the 13th minute.

But luck ran out 好运到头了 for Arsenal after that; Fabregas was taken off with a hamstring injury 肌腱拉伤，midfielder Alex Song was sent off 罚下 after two yellow cards 黄牌， Tomas Rosicky missed a penalty 点球， and Sunderland's Darren Bent scored.

Despite the late change in fortunes 运势的转变，Wenger was satisfied with his side's efforts, noting that they had travelled to Sunderland after a Champions League victory against Braga earlier in the week.

"We played on Wednesday at a high tempo 高节奏的（足球）。 Today we controlled 掌控了 the game in the second half, even with 10 men," he added. "We never looked in trouble."

"It's difficult to play at a high level three days after a Champions League match. But overall, I'm happy with the way we faced the game."

They got a fluke of a goal but I thought our first-half performance was excellent and we've got our reward.

"Conceding 输掉 late goals has happened to us repeatedly in the last 15 minutes - so it's jolly nice 非常令人高兴的 for it to happen for us," said Bruce.

"We worked extremely hard to be what we were. They got a fluke 侥幸，意外 of a goal but I thought our first-half performance 上半场表现 was excellent and we've got our reward."