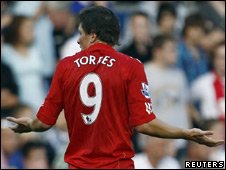 Torres has struggled to regain form since the World Cup.

"I think he is working hard for the team," said Hodgson. "He is a constant thorn in the side 烦恼 of defenders."

Thorn in the side is a phrase used when someone or something causes constant problems. But Hodgson denies that Torres has become a thorn in the side for his own team, the Reds 红军（利物浦）。

"We know he lacks match training 比赛中的训练," says Hodgson. "He missed matches at the end of last year and during the World Cup but I'm not at all concerned about Fernando Torres. He will get better and better."

He's shown no appetite for the game; he's looked frustrated, sloppy and lethargic.

Liverpool signed Torres from Spanish side Athletico Madrid in 2007, in a deal worth £26.5 million (276 million yuan). In December 2009 he became the fastest player in Liverpool history to score 50 league goals 联赛进球。

I thought he looked dangerous and became stronger as the game went on.

He was part of Spain's 2010 World Cup-winning squad, and was involved in the team's winning goal 制胜一球，crossing the ball to Cesc Fabregas, who set up the goalscorer.

The Liverpool manager, however, remains confident that Torres will return to peak form. "He's looking fitter with every game," said Hodgson after the Birmingham game. "I thought he looked dangerous and became stronger as the game went on."