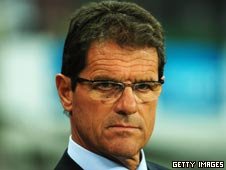 In England's first competitive 有竞争性的 match since their disappointing World Cup campaign, the team started on the road to recovery 水平逐渐回升 with a 4-0 win.

Defoe scored his first goal early on, followed by a second goal halfway through the match. Manchester City's Adam Johnston made it 3-0, with his first international goal of his career. Defoe then completed his treble 3个球， with another goal four minutes before the end of the game.

Defoe is always very important for us.

Fabio Capello gave credit 赞扬 to Jermain Defoe's performance saying, "He can shoot with his left foot and his right and his performance was really, really good and his movement without the ball was fantastic."

"He made two fantastic saves. He is the England keeper and he is playing very well. The most important thing was to win."

We had our chances and missed them and England scored.

Bulgarian manager, Stanimir Stoilov admitted that England had already won after Jermain Defoe's second goal saying, "Just when we had found our game we conceded 输掉 the second one and the game was over."

England's victory at Wembley gets their Euro 2012 qualifying campaign off to a good start and gives England manager, Fabio Capello, a much needed boost 非常需要的激励 following his team's dismal 不尽人意的 performance at the World Cup.

The next qualifying match is against Switzerland on Tuesday. However, the game has already been overshadowed 使…失色 by tabloid allegations 小报的指控 about star striker Wayne Rooney's private life.

The striker is still thought to be playing and England team-mate James Milner said he believes Rooney will just focus on the game ahead:

"I'm sure he'll continue to do that. Things are always said in the newspapers. It is part and parcel 不可避免的一部分 of football and down to us to make sure the only thing that matters is what happens on the pitch."