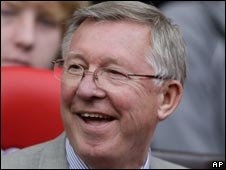 Sir Alex Ferguson was happy with his team's performance.

Wayne Rooney scored his first goal since March, as Manchester United cruised 轻而易举赢得 to a 3-0 victory over West Ham on Saturday.

Rooney scored from the penalty spot in the 33rd minute at Old Trafford, ending his five-month goal drought 一球未尽（原意：干旱）。

Manchester United's manager Sir Alex Ferguson was over the moon 非常高兴 to see his star striker back on top form 状态很好 saying:

"Rooney took his penalty well but his performance stood out for me. He enjoyed his football and was full of life."

Strikers want to score, but it is Wayne's performance that we should be talking about.

Sir Alex Ferguson also admitted Rooney "looked much more like himself and worked his socks off 非常努力训练".

Manchester United's assistant manager, Mike Phelen, has admitted that they had to build Wayne Rooney back up after England's disappointing World Cup campaign.

Phelen said, "He came back to us a little dishevelled 散乱的 from his England exploits 比赛."

I thought his overall game was much better, he looked a lot stronger and we look to him playing for England now and coming back fitter.

On Saturday Nani and Berbatov were Manchester United's other goal-scorers, giving the team a comfortable win and putting them in third place in the Premier League.

Sir Alex Ferguson said he was pleased with the improvement from their 2-2 draw against Fulham last week:

"It was disappointing last week but now we are back on track 恢复正常，重新步入正轨. It was a very, very good performance."

In contrast, goal-less West Ham remain rooted at the foot 扎根在联赛榜底 of the Premier League table after Saturday's match.

West Ham's manager Avram Grant admitted he knew this season would be tough and defended his players saying, "People can say what they like about this performance but we tried our best."