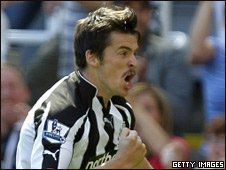 Andy Carroll scored a hat-trick 帽子戏法（在一场比赛中有三个进球）in the game and Kevin Nolan scored twice. But the goal that got everyone talking was the first, from Joey Barton.

In the ninth minute Newcastle United's keeper Steve Harper brought down 使某人倒地 Villa's Ashley Young, prompting a penalty shot. It was taken by the Norwegian international John Carew, but it went high. Three minutes later Joey Barton thumped in 劲射 his goal for the Magpies from twenty yards.

It was not only a weight off the midfielder's shoulders but also his face.

There have been periods when I thought this [moustache] might be a bit of a stupid idea, especially when my missus threatened to leave me.

Why? Because Barton had grown a rather untrendy 不时尚的 moustache, which he'd vowed to keep until his side won a league game.

After the game, Barton confessed that the win would come as a particular relief to his 'missus', his wife, whom he joked had threatened to leave him over the unloved facial growth.

Villa had dominated the early stages of the game but Barton's goal seemed to turn the tide 转变了势头。Nolan headed in a second goal soon after the thirty-minute mark and Carroll grabbed a third shortly before half-time.

Everyone was expecting the Villains 维拉人 to bounce back after the break but it never happened. Nolan hooked in 钩射 a second goal and Carroll completed his hat-trick in the ninety-third minute.

We knew that if we were able to get a fourth goal then in effect it would kill them off. They get one back and then it changes, we get a little more on the back foot.

At the end of the memorable game, Newcastle's manager Chris Hughton explained that they'd won because they had maintained momentum 保持动力、士气 in the second half.

The Magpies were never put "on the back foot 处于防守境地" by Villa; indeed a fourth goal was the opportunity they needed to "kill them off".

Meanwhile, Aston Villa's caretaker manager 临时教练 Kevin MacDonald conceded that his side had been "well and truly 完全地、彻底地 hammered 被击败" by Newcastle.

Amazingly, it was just one of three 6-0 scorelines produced at the weekend. Arsenal thrashed Blackpool and Wigan were battered 被痛击 by the visitors客队 Chelsea.