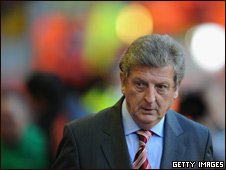 Roy Hodgson is likely to have a new boss soon.

Liverpool FC fans are on the edge of their seats (喻) 对某事紧张。At the end of last week the Hong Kong businessman Kenny Huang confirmed that his investment company QSL Sports had put in a bid 投标、出价 for the debt-ridden 负债累累的 club.

The Reds owe around £237m (2.6 billion yuan) to their main creditor 债权人 the Royal Bank of Scotland. The club's current owners George Gillett and Tom Hicks put it on the market in April.

It is thought that the total value of the deal put together by Huang and his backers 赞助者 is £450m (4.9 billion yuan). This includes around £300m (3.2 billion yuan) to pay off Liverpool's debts and £150m (1.6 billion yuan) to start paying for the construction of a new stadium and to bring in new players.

If such a deal goes through Hicks and Gillet will have made no profit over the period of their ownership.

I think the danger would be in a late takeover... We wouldn't have had a chance to research the players in this transfer window.

That fact will please many disgruntled 不满的 Anfield fans but they will be less gratified 高兴的 by a potentially paltry 微不足道的 amount of money left over for transfers. However, Anfield's new manager Roy Hodgson has made it clear that he is more concerned about the timing of any takeover 接管 than he is about the amount.

For this reason a decision is expected by the end of this week. Huang's deal is not the only one on the table; Hicks and Gillet are thought to have at least three foreign bidders, one of whom is the Syrian Canadian businessman Yahya Kirdi.

But there is one set of people who are particularly keen to see an agreement with Huang: Liverpool's Chinese community.

Liverpool has Europe's oldest Chinese community. It dates back to 追溯到 the nineteenth century, when some Chinese sailors married Irishwomen and settled in the north-west.

The Americans have just been in to turn a fast buck. The Chinese always look at the big picture, long-term investment.

When Mr Ling accuses Gillet and Hicks of trying to turn "a fast buck" he means that they were just interested in making money out of the club, not seeing it grow.

But will Kenny Huang get the chance to prove Mr Ling right? We should find out by the end of this week.