Spain have become World Champions for the first time as they overcame the Netherlands 1-0 in Soccer City, Johannesburg. 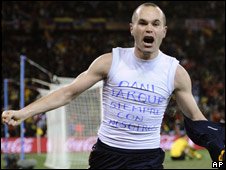 Iniesta dedicated his goal to his friend Dani Jarque.

After the euphoric 欣快的 closing ceremony and an appearance by Nelson Mandela, the match itself was tense and bad-tempered 坏脾气的。

The Netherlands played an aggressive 攻击性的 game which seemed to nullify 抵消 Spain's passing supremacy 霸主地位。However, they failed to seal a victory, with Dutch forward Arjen Robben missing a couple of chances to score.

The winning goal came from Andres Iniesta in the 26th minute of extra time. After scoring he tore off his shirt to reveal a handwritten note scrawled 潦草涂写 on his vest - "Dani Jarque: Siempre con Nosotros" which means "Dani Jarque: Always with Us".

I wanted to carry Dani Jarque with me and with my other team-mates. We wanted to feel his strength. We wanted to pay tribute to him in the world of football.

Dani Jarque was a friend and team-mate of Iniesta's in the Spanish junior side. He died of a heart attack at the age of 26 last year.

Iniesta's tribute 贡献 resulted in him getting a yellow card, since players are not allowed to remove their shirts during the game.

That was just one of fourteen yellow cards awarded by the referee Howard Webb in a match that also saw Dutch defender Johnny Heitinga get sent off 被罚出场。In one shocking incident, which perhaps Webb did not see clearly, Netherlands midfielder Nigel De Jong performed a kung fu 功夫 style tackle on Xabi Alonso.

We made a real game out of it and we had two great chances through Arjen [Robben].

After the match the Dutch coach Bert van Marwijk defended his team's playing style. When he says that they "made a real game out of it" he means that they made it difficult for Spain to win.

The Spanish coach Vicente del Bosque also paid tribute to the runners-up 亚军, saying "They made it very difficult for us to play comfortably". But of course, he saved his warmest comments for his own team, saying "I think our effort, our flair 才华，is never-ending".

Spain had a shaky start 不稳定的开始 to their World Cup campaign, losing their first match 1-0 to Switzerland. But they quickly found their form 找到了状态 and only conceded one further goal throughout the whole of the tournament.

Spain in 2010 will be remembered more for their fluid 流畅的 passing than for a torrent 连续不断的 of goals. They won the tournament with the fewest goals ever – just eight in seven games.

But fans in Barcelona and Madrid don't care about that. As del Bosque put it, "This goes beyond sport. We have to celebrate and are delighted to be able to offer this victory to all the people of Spain."