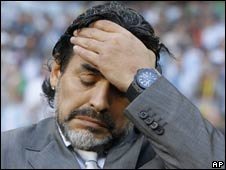 Argentina coach, Maradonna was upset at the result.

Over the weekend Spain, the Netherlands, Uruguay and Germany made it through to the semi-finals of the World Cup, but the qualifying matches 排位赛、资格赛 were not without a few surprises.

One of the biggest shocks at the weekend was Germany's 4-0 triumph 胜利 over South American heavyweights 重量级选手 Argentina.

The young German team coped with 应对 everything Argentina could throw at them 对付德国的浑身解数，which left the South American team with their worst World Cup defeat in 52 years.

After the game, Argentina coach Diego Maradonna, was left emotional 情绪激动的 on the sidelines 边线 and is now contemplating 考虑 his future with the team.

I'll have to think carefully about it and talk with my family and the players. There are many issues here.

Maradonna says he needs to talk with the players and his family before he makes a decision.

The fiery 暴躁的 coach also spoke about how the Argentine people will feel about the team's performance.

"This is a country where you live and breathe football. I don't think that anybody will be happy when the team loses 4-0."

Another shocking outcome of the weekend's matches was hot favourites Brazil being knocked out 被踢出局 of the competition by the Netherlands.

I've been very happy to coach this Brazil team, but if you look at the players' faces now, you know how they feel.

The dramatic 戏剧性的 game saw Brazil playing with 10 men, after Felipe Melo was given a red card 吃了一张红牌 following an altercation 争执、争议 with the opposing 对手的 team's Arjen Robben.

After the game Brazil coach, Dunga talked about the team's surprise defeat.

"We're all extremely sad, we didn't expect this. We played well in the first half but we weren't able to maintain that rhythm 保持那种节奏。"

The shock exit of the five time World Cup winners has resulted in the team's coach, Dunga getting the sack 被解雇。

Just over three weeks ago the World Cup started with 32 teams and now it's down to the final four. Uruguay will play the Netherlands and Spain will face Germany.

Spanish player, Andres Iniesta is looking forward to the game saying, "It will be a game between two rivals 竞争对手 who enjoy having the ball and I think it will be a beautiful battle 漂亮的比赛。"