England have suffered their worst ever defeat in a World Cup tournament, losing 4-1 on Sunday to a superior German side. 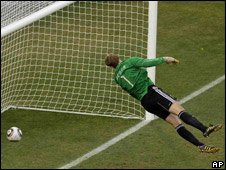 Lampard's goal was disallowed. Would it have made a difference?

While the winners go on to an exciting quarterfinal confrontation 对抗 with Argentina, the English performance had every newspaper journalist at home reaching for the thesaurus 同义词词典。"Awful... woeful 糟糕透顶的... inept 无能的... flat-footed 扁平足（这里指英格兰队员笨拙）" are some of the adjectives that found their way into Monday's papers.

The score was 2-1 to Germany when a moment arrived that will haunt 缠绕，使人难以忘却 England fans for years to come. Frank Lampard struck the ball high over Neuer and it bounced down and out of the goal.

We can never say now exactly what it'd have done to the game but we'd have been 2-2 at half-time... so for sure it would have been a different game.

TV replays 重放 clearly show the ball bouncing over the line, but neither the referee nor the linesman had access to those. For Lampard, it was a decision that turned the whole game.

Lampard probably isn't aware of the way his name is transliterated 音译 into Chinese – 兰帕德（暗示英格兰怕德国）。Soon after the disappointment with his goal, he rattled 发出吱吱响声 the German crossbar with a long-range shot.

The second half started well for England, but their push for an equaliser left them open at the back and they conceded 输给 a further two goals within three minutes of each other. As Gerrard put it, England were "killed off" when they lost their belief, their confidence.

Frank's goal got disallowed, which was a big turning point and the goal at 3-1 kills us off, because then you lose your belief.

Would England have won if Lampard's goal had been allowed? Even the most ardent 热情的 fans aren't so deluded as to believe that. It was a crushing 极大的打击 end to a World Cup campaign that never came alive 唤醒，活跃起来 for England.

The referee Jorge Larrionda's error, together with another poor decision in the Argentina-Mexico game, will lead some to question FIFA's reluctance to use the sort of technology that has transformed tennis.

But England's performance begs many more questions 提出更多的问题, including:

Will the national coach Fabio Capello stay in his job?

Why is it that Wayne Rooney, who is one of the best strikers in the world, hasn't scored a single goal in two World Cups?

Just how do you bring 23 club players together to form a cohesive 团结一致的 team?

And, most agonising of all:

Will England ever win the World Cup again?