England got off to a disappointing and shaky 不稳定的 start in their World Cup campaign, drawing 1-1 against the USA.

The match began well enough for England with a lovely goal from captain Steven Gerrard, who picked up a sneaky 巧妙的 tap 轻射 forward from Emile Heskey. 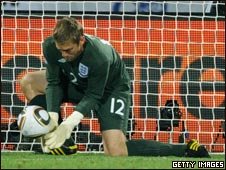 Will Robert Green - and England - bounce back?

England continued to dominate the game but disaster struck five minutes before half-time. The USA's Clint Dempsey took a shot from 25 yards 码(大约等于23米) which England's keeper Robert Green reached but fumbled 手忙脚乱从而失球 hopelessly. The ball slipped through his hands and rolled gently across the line, giving the USA the equaliser 扳平比分的一球 they needed.

In the second half England continued to create chances, launching no fewer than 18 shots forward. The best opportunity was given to Heskey, who found himself with only the USA's goalie Tim Howard to beat. Sadly for England, Heskey's confidence failed and he fired the ball straight at the keeper.

Rob Green also got a chance to begin rebuilding his reputation when he turned Jozy Altidore's shot past the post. England showed some vulnerability 弱点 in defence, as they were outpaced 超过 by the USA's attack on a number of occasions.

I'm not surprised to see the criticism he has got in the newspapers back home because that is part and parcel of being an England player.

So England's coach Fabio Capello will have several things to think about before their next match against Algeria this Friday. But for many English fans, the game was lost on a single glaring 明显的 error from Rob Green.

Britain's famously unforgiving tabloid press 小报媒体 are definitely unlikely ever to let Green forget what happened. England's former captain Alan Shearer said that he felt "desperately sorry" for Green but indicated that he would have to get accustomed 变的习惯于 to getting ribbed 嘲弄 by the press. When he says it's "part and parcel of being an England player" he means that it's a part of the job that cannot be avoided.

I've cost us a goal which is regrettable but something to bounce back from.

Green certainly seemed calm when the BBC interviewed him after the match. When he said that his mistake was "something to bounce back from" （从挫折中）恢复过来he was being as positive as he could be about his future as a player. However, since a ball had just bounced out of his hands and into his goal perhaps this wasn't the very best choice of metaphor 比喻.

Meanwhile, England's arch-rivals 夙敌in the World Cup, Germany, showed themselves to be in blistering form 极好的状态 as they demolished Australia 4-0 on Sunday.

If England remain in second place in their group and Germany continue to sit at the top of Group D then the two sides will meet on 27 June. That's a bit earlier than England would choose to face the team that proved their nemesis 冤家，仇敌 in the 1990 World Cup and the 1996 European Championship.