The win has given the club its first Champions League title for 45 years and thrilled loyal fans.

Inter Milan President Massimo Moratti put the feelings of many into words.

The players were wrapped up in joy; it's an infinite joy, it's marvellous.

When Moratti says "the players were wrapped up in joy" and "infinite joy", he is describing the great happiness the players felt after winning the title.

The team's success has cemented Jose Mourinho's name in history

穆里尼奥的名字被记入历史，making him the third man ever to win the title with two clubs.

Goal-scorer Diego Milito hailed 称颂 his coach as the mastermind 幕后策划者 behind the victory.

"Mourinho deserves this the most. He is a great coach and he deserves all of the credit 应得到所有的赞扬 for this success." 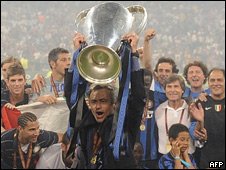 Jose Mourinho previously won the Champions League with Porto in 2004

Following the game all eyes were on 所有的目光都投放在 the Inter Milan coach, with rumours of an imminent 即将发生的 move to Real Madrid.

As he waved to the fans after watching his team lift the trophy, many people sensed it was a goodbye.

Speaking after the match Mourinho said "I'm so sad as almost for sure it's my last game with Inter."

Characteristically confident, Mourinho did not seem daunted 畏惧 by the possibility of taking over one of the world's biggest football clubs and was eager 急于 to remind people of his successful past.

For me now Madrid will just be another club trying to win important things.

"When I first went to Porto they were not winning the championship and they were not making headway 取得进展 in the Champions League. At Porto, at Chelsea, at Inter we always has successful seasons."

No confirmation of a move has been made. However, Mourinho is already plotting 策划 to achieve more Champions League victories, saying "Perhaps I can win it a third, fourth or fifth time…"