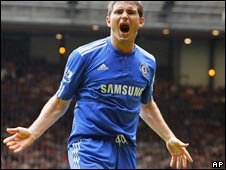 Chelsea look virtually certain 基本上已成定局/确定 to win the Premier League title this season following their 2-0 victory over Liverpool at Anfield on Sunday.

With only one game left to play, their biggest rivals Manchester United need Chelsea to lose to Wigan next week.

Only one point separates Chelsea and Manchester United so it is still mathematically possible 数理上/理论上有可能的 for United to win the league if they beat Stoke next Sunday and Chelsea lose.

Most pundits 专业评论家 agree, however, that Chelsea will comfortably beat Wigan, who currently lie 15th in the league.

They [Wigan] are a good team, they'll have a go and you never know. It's a crazy game.

One person who does not see the result as a foregone conclusion 预料的结果/定论 is Sir Alex Ferguson, the manager of Manchester United.

Sir Alex refuses to accept the title race is over and hopes that Wigan can embarrass Chelsea next week.

"They [Wigan] are a good team, they'll have a go and you never know. It's a crazy game," he said.

The phrase 'have a go' means to try aggressively to win. When Sir Alex says 'you never know' he is using a phrase that expresses doubtful optimism 拿不准的/含糊的乐观.

Wigan boss Roberto Martinez has promised that his team will be no pushovers 容易打败的对手 when they face Chelsea.

There's a real lot of talent in this squad, a real load of ability and you have to walk out with a bit of cockiness.

"We will prepare in the best possible manner as we know it is a tough place to go, but I can guarantee everyone that we will give our best," Martinez told the BBC.

Despite the hopes of Sir Alex and the best intentions of Wigan, it does seem that Chelsea are on course to win the Premiership for the first time since 2006.

It has been a very special season for Chelsea, who are also in line to win the FA Cup 足总赛.

Chelsea midfielder Frank Lampard summed it up as "a season of peaks and troughs 动荡起伏的", meaning that it has had lots of great moments and lots of terrible moments for the team.

Lampard said that as well as having ability, his team had a special kind of self-belief, one that could almost border on arrogance 近乎傲慢的.

"There's a real lot of talent in this squad, a real load of ability and you have to walk out with a bit of cockiness 趾高气扬," he said.

If they can maintain their talent, ability and cockiness for just one more week then Chelsea will deservedly be winners and Premier League champions.