Frank Lampard is the man of the moment, netting 射门得分 four goals for Chelsea on Saturday in a pasting 糊化了（指完全击败）of Aston Villa. 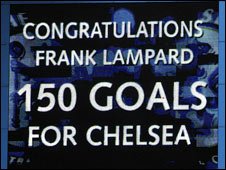 Frank Lampard gets his 150th goal

It brings his total to 151 goals for the Blues, making him Chelsea's third-highest scorer, a feat 壮举 on its own, but especially brilliant for a midfield player.

He heaped praise on his own team:

"The build-up to all the goals was good football - even the penalties. That football is the way we want to play, open and expansive 可扩张的（指充分利用球场的空间）." Expansive means using all of the pitch area well.

Florent Malouda's two strikes and Kalou's one adding to Lampard's goals, were the icing on the cake 锦上添花, bringing the score to 7-1. The win was all the more exceptional because it was accomplished 完成了 without main frontman 前锋 Didier Drogba, who was rested after a minor injury.

The build-up to all the goals was good football - even the penalties. That football is the way we want to play, open and expansive.

The victory made up for 弥补了，抵消了（遗憾） the disappointment of their Champions League exit 出局 at the hands of Inter Milan, Lampard admitted:

"We were in a bit of a rut 陷入僵局（指连接不断地输掉比赛） after losing in the Champions League". A rut is a bad position that is difficult to get out of.

Although Villa made a good start, the game soon deteriorated 恶化了 into a disaster for them. Aston Villa manager Martin O'Neill felt his side had thrown in the towel （成语）放弃了 , exclaiming:

"We stopped competing at 3-1 and that's unforgivable. We had the possibility of going 2-2 but it went 3-1 and the floodgates 防洪闸门 opened.

When you say the floodgates open it means that something which was preventing from happening suddenly happens a lot. Here it means Chelsea started scoring a lot of goals.

Chelsea's success puts them second in the table, one point behind leaders Manchester United, who won 4-0 against Bolton. With only six games left in the title race, Chelsea and Man United will face each other next Saturday at Old Trafford in what promises to be a clash of the titans 诸神之战，这里形容双方的对决.

It was the perfect tonic before we go to Old Trafford next weekend. We fear nobody and we'll go there and play and hopefully we'll get the right result.

Chelsea are perfectly placed after the win to face 面对 their opponents. Assistant manager Ray Wilkins was feeling confident, saying:

"It was the perfect tonic 有兴奋作用的东西 before we go to Old Trafford next weekend. We fear nobody and we'll go there and play and hopefully we'll get the right result."

A tonic is something that makes you feel better.

The outcome of Saturday's match will be eagerly anticipated by fans as an indicator of who will claim the Premier League crown. Can Chelsea thwart 挫败 Man United's drive to claim an unprecedented 史无前例的 fourth successive League title?

Only time will tell.