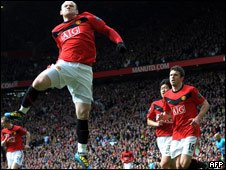 Sunday's vital clash 关键比赛 between Manchester United and Liverpool was a typically feisty affair 爆发性事件 with United winning the game 2-1, but was the penalty that got them back in the game fair or foul 公平的还是违规的?

Unsurprisingly, the under-pressure manager of Liverpool Rafa Benitez questioned the referee's decision to award a penalty after Antonio Valencia was dragged down 被拖倒了 by a Liverpool player outside and inside the box.

Benitez told the BBC that there were "doubts" over the penalty decision.

"The penalty made a big difference. We were playing well and had confidence and then one situation changed everything," said Benitez.

Manchester's weekend victory was matched by Arsenal who beat West Ham 2-1 on Saturday, while Chelsea could only scrape 勉强地取得 a 1-1 draw with Blackburn Rovers.

If you look at the run-ins for the teams, it could very well go to the wire.

All of which means that the top of the table 排行榜前几名 has changed around with Manchester United in first place with a two-point lead over second-placed Arsenal, while Chelsea are in third place four points behind the leader.

However, as Chelsea have one more game to play than their rivals 竞争对手, the race for the Premier League title is tighter than ever.

Manchester United manager Sir Alex Ferguson believes that it is too tight to call 太难判断或预测 which team will win.

We want to win the trophy because we are all conscious we have won nothing yet.

"No-one is going away. We are all knocking on doors," he added.

In this context the phrase 'knocking on doors' means keeping constant pressure on the opposition.

Ferguson added that he expected the race to be decided at the last possible moment.

"If you look at the run-ins 赛季最后的几场比赛 for the teams, it could very well go to the wire 要到最后一刻才知分晓," he said.

And it seems that the other managers agree.

"We have a good chance to do it this year," Arsenal manager Arsene Wenger said on Saturday.

"We want to win the trophy because we are all conscious we have won nothing yet. The hunger, the talent and I think the nerves are there, " he added.

It looks like this year's winners will be the ones who can keep their cool 保持镇静 in the next few weeks.