David Beckham had a dream: to be the first English player to appear in four World Cups.

But now it appears that dream is over after a serious injury to his Achilles tendon 跟腱 means he could be out of action 无法参赛 for around six months. With this year's World Cup in South Africa only three months away, sadly Beckham looks set to miss out. 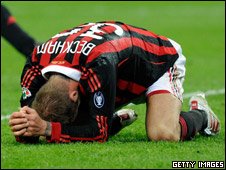 Beckham has recovered from injury before

The agonising 使人极度痛苦的 injury happened while Beckham was playing for AC Milan against AC Chievo in the Italian league. After attempting to kick the ball he collapsed 倒下了 to the ground and hobbled 蹒跚而行 off the pitch before being stretchered 被担架抬走了 away.

It is not yet known whether he has completely severed 切断了 his Achilles tendon or only torn 撕裂了 it. The player has now flown to Finland for assessment 诊断 and treatment 治疗 by a knee specialist 膝盖专家.

David is a great professional and has worked very hard to be ready for the World Cup, so missing it will be a big blow.

"We have to wait for the results of the scan 扫描 but it looks like he is out of the World Cup," he said in a statement. "I spoke with him after the game on Sunday night to offer my support.

"David is a great professional and has worked very hard to be ready for the World Cup, so missing it will be a big blow."

To say something is a big blow means it is a big disappointment.

"It is a horrible situation 非常糟糕的情况 for Beckham. I know how much it meant to him to be in the World Cup and how important he was to the England team.

"He will be devastated 绝望的."

David Beckham is now 34 and some are asking whether this serious injury could mean his whole career is over.

Whatever happens, as one of football's best-known and popular players, Beckham will have no shortage of encouragement 鼓励 from fans around the world.

You never want to write off David Beckham as he has shown us his ability to bounce back.

Some will remember Beckham's miraculous recovery 奇迹般的恢复 from an Achilles injury in 2006, when he was back on the pitch after only eight weeks.

If he could repeat the same feat 壮举，非凡的事情 in time for the World Cup it really would be the stuff of fairytales 童话般的奇迹.

So, perhaps all is not lost. Optimists 乐观主义者 will take heart from 受到鼓舞 Alexei Lalas' words:

"You never want to write off 排除 David Beckham as he has shown us his ability to bounce back 恢复原状."