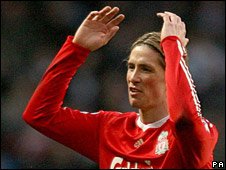 Liverpool's Torres has been injured for much of the season

With eleven matches remaining in this year’s Premier League, Chelsea have opened up a four-point gap 四分差距 at the top of the table over rivals Manchester United, with Arsenal two points further behind in third.

But another intriguing 引人入胜的 battle is taking shape 成型: one for fourth position in the table.

While it may not seem that important a position, the team who finishes fourth in the Premier League automatically qualifies 自动获得资格 for next season’s Champions League 冠军联赛, a competition which means big bucks 大笔收入 for the teams concerned because of the television coverage 电视转播.

So, who are the contenders 竞争者，争夺者?

At the moment only one point separates four teams: Tottenham and Manchester City who are level 并列 on 46 points, and Liverpool and Aston Villa who both have 45 points.

Tottenham beat Wigan 3-0 on Saturday to move into fourth place, but their manager Harry Redknapp said the race is still too close to call 势均力敌.

"I'm not saying we'll finish fourth but we'll scrap away 不惜一切代价地争取 and we've got as good a chance as anyone," said Redknapp.

I'm not saying we'll finish fourth but we'll scrap away and we've got as good a chance as anyone.

Of the four teams, Liverpool have the biggest reputation and most to lose if they fail to finish fourth.

Their manager Rafael Benitez has already put his name on the line 冒着名誉受损害的风险 this season by guaranteeing 保证 his side will finish in the top four.

But after his side were held 0-0 by rivals Manchester City on Sunday, he was more downbeat 消沉的.

"I don't think the result is good for anyone. We both wanted to win and I have to think about the positives," he stated.

"I said before it would be a long race and we have to keep going to the end.

"It was important not to concede ground 认输，让步 to Liverpool," he said. "It was probably a better result for us than it was for Liverpool.

It was important not to concede ground to Liverpool. It was probably a better result for us than it was for Liverpool

"We would like to have won but in the end I think the result was the right one."

And the last of the four hopefuls, Aston Villa, enjoyed a comprehensive victory over Burnley at the weekend, winning 5-2.

But their manager Martin O’Neill didn’t want to speculate about their chances of getting into the Champions League, preferring to concentrate on the day’s performance.

"We started slowly. We didn't get into gear 进入最佳状态 in the first half and were sluggish 迟缓," he conceded.

"But in a game where expectations were high for us to win it, to come from behind was very pleasing."

So who will finish fourth?

In five out of the past six seasons, the top four places have been occupied by Manchester United, Chelsea, Liverpool and Arsenal.

But Liverpool face the very real danger of dropping out 退出 this season, which could open the way for the likes of 像...一样的（球队） Tottenham, City and Villa to savour 品味 the Champions League.