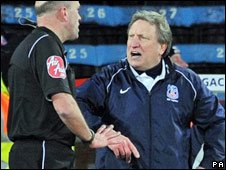 Warnock had plenty to say to the match officials

The FA Cup 足总杯 is a competition known for unexpected drama as clubs from the lower leagues 低于英超的级别 often get a chance to take on 挑战 opponents they would never normally get the chance to play.

So it's no wonder that FA Cup games are passionate, hard-fought affairs 争夺激烈的比赛 where tempers can flare 怒气会爆发.

And nowhere was that more apparent this weekend than in the match between the Championship's Crystal Palace 英冠联赛的水晶宫队 and the Premier League's Aston Villa which ended in a controversial 具有争议的 2-2 draw.

I don't feel any sympathy if Mr Massey is suspended. I hope it's for a long time.

Crystal Palace manager Neil Warnock blew his top 气得大发雷霆 after one of the game's linesmen 边线裁判员, Trevor Massey, awarded a corner to Aston Villa late in the game that allowed them to equalise 打平 in the dying minutes.

Massey's decision was indeed incorrect and his mistake means that the two teams must play again to decide who will go through to the next round.

"It's a disgrace and he should be banned for weeks," raged 怒斥 Warnock, calling for the linesman's suspension 停职.

"I don't feel any sympathy if Mr Massey is suspended. I hope it's for a long time," he ranted 不停地大声抱怨.

When you're sat on your settee when you're suspended will you think about us?

And Warnock's embittered rant 怨声载道 didn't stop there as he described his confrontation 对峙，冲突 with the unfortunate official after the game.

"I don't feel any sympathy if he is suspended. I said to him: 'When you're sat on your settee when you're suspended will you think about us?'" raved 极度愤怒地说话 Warnock.

"He [Massey] didn't apologise, he only said he'll take a look at it when he gets home. That'll really help me and Crystal Palace, won't it?"

However, the game's result may be a blessing in disguise 因祸得福 for cash-strapped 资金紧张的 Palace as the TV rights 电视播放版权 and ticket sales for the replay should earn them a minimum of £500,000 (55m yuan).

And that is good news for the team that were placed in administration（破产后）被接管 last month.

They also were the team to sign Sun Jihai from Dalian Wanda 大连万达队 way back in 1998.