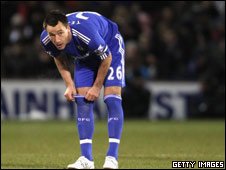 Terry may want to keep a low profile over the affair

Chelsea reinforced their position at the top of the Premier League on Saturday by beating Burnley 2-1.

However, events off the pitch overshadowed 蒙上阴影 what should have been a day of celebration for the west London team.

Chelsea captain John Terry’s name dominated the headlines 统领/充斥报端 for all the wrong reasons as he was named and shamed 被点名羞辱 by the press over his affair 外遇 with another footballer’s girlfriend.

John Terry is a fantastic player and a good England captain, but to be the captain of England you have got to have wider responsibilities.

The UK’s tabloid newspapers had a field day 欣喜之日 after reporting restrictions 解除报道限制 were lifted by the High Court 高等法院, allowing the press to publish the story of how Terry had cheated on 对…不忠实 his wife with the girlfriend of his former Chelsea team-mate and best friend Wayne Bridge.

Terry had tried to gag the press 压制新闻界 by taking out a court injunction 法庭禁令 against certain newspapers to prevent them from publishing the story of his marital infidelity 对婚姻不忠实.

Terry’s future as captain of the England national squad has been called into question, with many pundits 评论人士 demanding he be stripped of the captaincy.

The UK’s Sports Minister Gerry Sutcliffe said, "If these allegations 指控 are proven, it calls into question his role as England captain."

"On the field John Terry is a fantastic player and a good England captain, but to be the captain of England you have got to have wider responsibilities for the country," he added.

Chelsea manager Carlo Ancelotti has so far taken a different view, retaining Terry as club captain. And his faith paid off 得以回报 on Saturday as it was Terry who scored the winning goal against Burnley.

He [Nani]'s a very shy boy and maybe his personality is getting stronger.

Whatever problems he may be facing in his private life have not affected his performance on the pitch yet.

Elsewhere in the Premiership Manchester United demonstrated their desire to stay in the title race with an emphatic 有力的/显著的 3-1 victory over Arsenal on Sunday.

Wayne Rooney continued his excellent run, scoring one goal, which brought his tally 总数 of goals in the Premier League to 100.

One player who was singled out for praise by the United manager Sir Alex Ferguson was Nani, who has finally started to realise his potential 实现了他的潜力.

Nani has started four of United's last five matches and Ferguson believes his character is transforming as well as his form 竞技状态.

"He's a very shy boy and maybe his personality is getting stronger to play for us every week. Today was an example of that maturity," said Ferguson.